This dataset contains laser scanning point clouds of a 32-meter RT4 radiotelescope located in the radioastronomical observatory in Piwnice in Poland. Measurements were performed on 18th May 2018 using two laser scanners: Leica P40 (shared by Leica Geosystems Poland) and Riegl VZ400 (shared by Geotronics Dystrybucja Sp. z o.o.). The cloud points from each scanner are separate sets which can be processed and analysed independently. The scanners were set up to cover the whole object with its range and, most importantly, they were stationary throughout the scanning process. To scan the entire construction, the possibility of moving the radiotelescope around its own axis was used. Eight scans were made. After each scan, the radiotelescope was rotated about 45 degrees around its vertical axis which allowed for a detailed scan of all construction elements. Moreover, we decided to scan the radiotelescope in two positions of a dish: when it was set in zenith direction and when a zenith angle was about 90 degrees. In this way, we ensured the accurate scanning of moving parts of the dish as well as its panels, which is useful during modelling. Consequently, sixteen scans were acquired for each scanner and stored in e57 (for Leica P40) and LAS (for Riegl VZ400) file format. 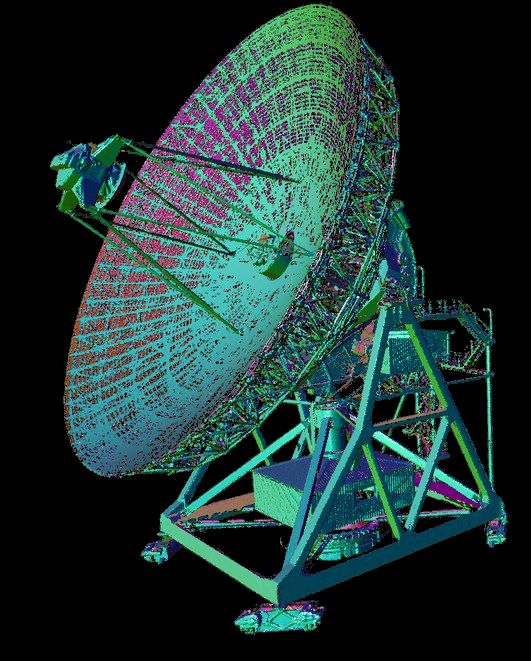