Long-term hindcast simulation of sea level in the Baltic Sea

The dataset contains the results of numerical modelling of sea level fluctuations over a period of 50 years (1958-2007) in the Baltic Sea. A long-term hindcast simulation was performed using a three-dimensional hydrodynamic model PM3D (Kowalewski and Kowalewska-Kalkowska, 2017), a new version of the M3D model (Kowalewski, 1997). The hydrodynamic model was coupled with a numerical dynamic-thermodynamic model of sea ice (Herman et al. 2011).

The model is based on the Princeton Ocean Model (POM) developed at Princeton University (Blumberg and Mellor, 1987). Like POM, the M3D/PM3D model uses the Mellor-Yamada turbulence scheme and sigma vertical coordinates. The simulation was carried out in a rectangular grid of 3' (latitude) and 6' (longitude) resolution. The spatial resolution was 3 nautical miles, i.e. about 5.5 km. An open boundary was located between the Skagerrak and the Kattegat along the parallel connecting Skagen and Göteborg, where the water exchange with the North Sea takes place. A radiation condition based on Somerfield’s concept for velocities  vertically averaged and normal to the boarder  plane was applied. Atmospheric forcing for the period 1958-2007 was performed using the regional at amospheric climate model REMO (REgional MOdel) which was based on the numerical weather prediction model EM (Europa-Model) of the German Weather Forecast Service (DWD).

The sea level spatial distributions were recorded in the model's computational grid in unprojected form (LatLong, WGS 84, EPSG: 4326) with an hourly time interval. Sea level values are expressed in metres relative to the mean level of the Baltic Sea in the PM3D model. The validation of the sea level modeling results for the period 2010-2015 showed (Kowalewski and Kowalewska-Kalkowska, 2017) a root mean square error (RMSE) of 8 to 13 cm for various stations in the Baltic Sea. 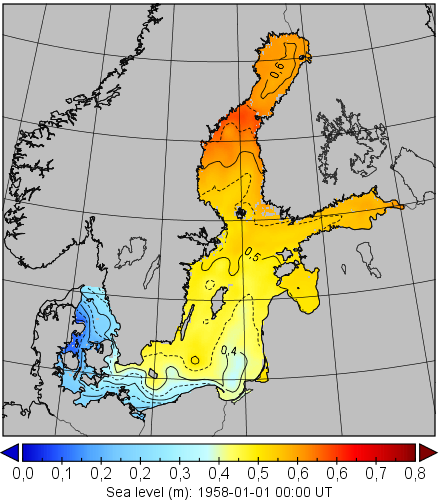 Version this document has several versions